Skip to Main Content
It looks like you're using Internet Explorer 11 or older. This website works best with modern browsers such as the latest versions of Chrome, Firefox, Safari, and Edge. If you continue with this browser, you may see unexpected results.

The Return of Blue Lake

The UNM-Taos Return of Blue Lake Library Guide is designed to offer resources and historical context for this momentous occasion in celebration of the 50th Anniversary of the return of Blue Lake to the Taos Pueblo people. 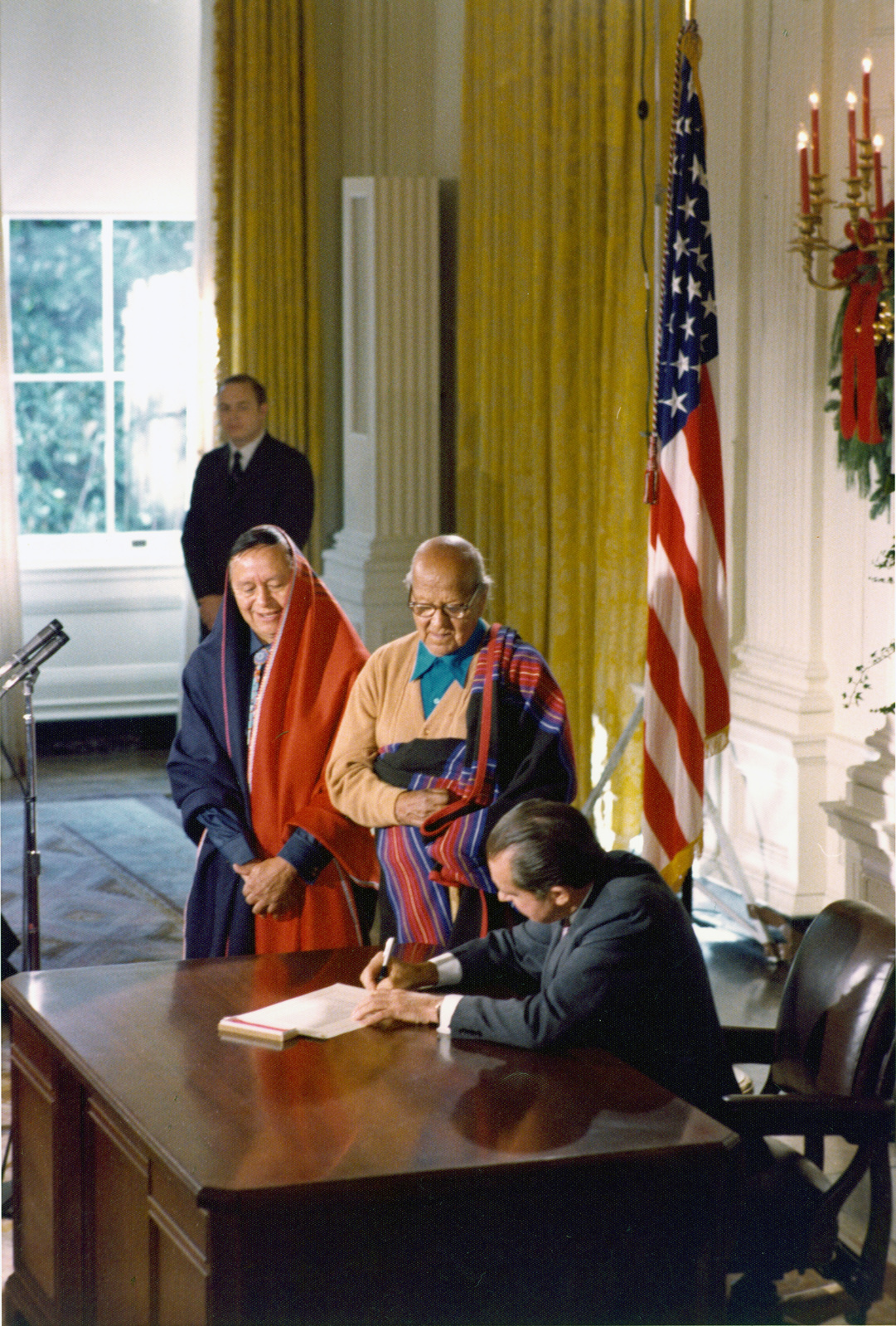 This LibGuide was made by Tetsuro Namba (UNM-Taos Library) and Chenoa Velarde (UNM-Taos Cultural Programming).

If you have any comments about this guide, or if you know of any materials that you think should be added, please contact the UNM-Taos Library at unmtlib@unm.edu.

Welcome to the Return of Blue Lake LibGuide!

Taos Pueblo is a living Indigenous community located at the base of the beautiful Sangre de Cristo Mountain range. The people of Taos Pueblo have a detailed oral history which is not divulged due to religious privacy. The ancestors of the Taos people lived in the Taos valley long before the establishment of European nation-states and hundreds of years before Columbus discovered the American continent. The single most dramatic event in the recent history of Taos Pueblo land is the 1970 return of 48,000 acres of mountain land including the sacred Blue Lake. It was taken by the U.S. Government in 1906 to become part of the National Forest lands. Among the ritual sites where Taos Pueblo people go for ceremonial reasons, Blue Lake is perhaps the most important. Its return is a tribute to the tenacity of Pueblo leaders and to the community’s commitment to guarding lands for the spiritual, cultural, and economic health of Taos Pueblo. The return of this land capped a long history of struggle between the people of Taos and the U.S. Federal Government.

The UNM-Taos Return of Blue Lake Library Guide is designed to offer resources and historical context for this momentous occasion in celebration of the 50th Anniversary of the return of Blue Lake to the Taos Pueblo people. The material is focused on the political & legal campaign as well as the public discourse surrounding it.

UNM-Taos recognizes and honors the unique history of the Indigenous peoples of the beautiful Taos Valley.

Much of the materials you will find indexed in this guide is historically situated, and as such might use language or imagery that is no longer appropriate. Please keep this in mind as you navigate through these materials. 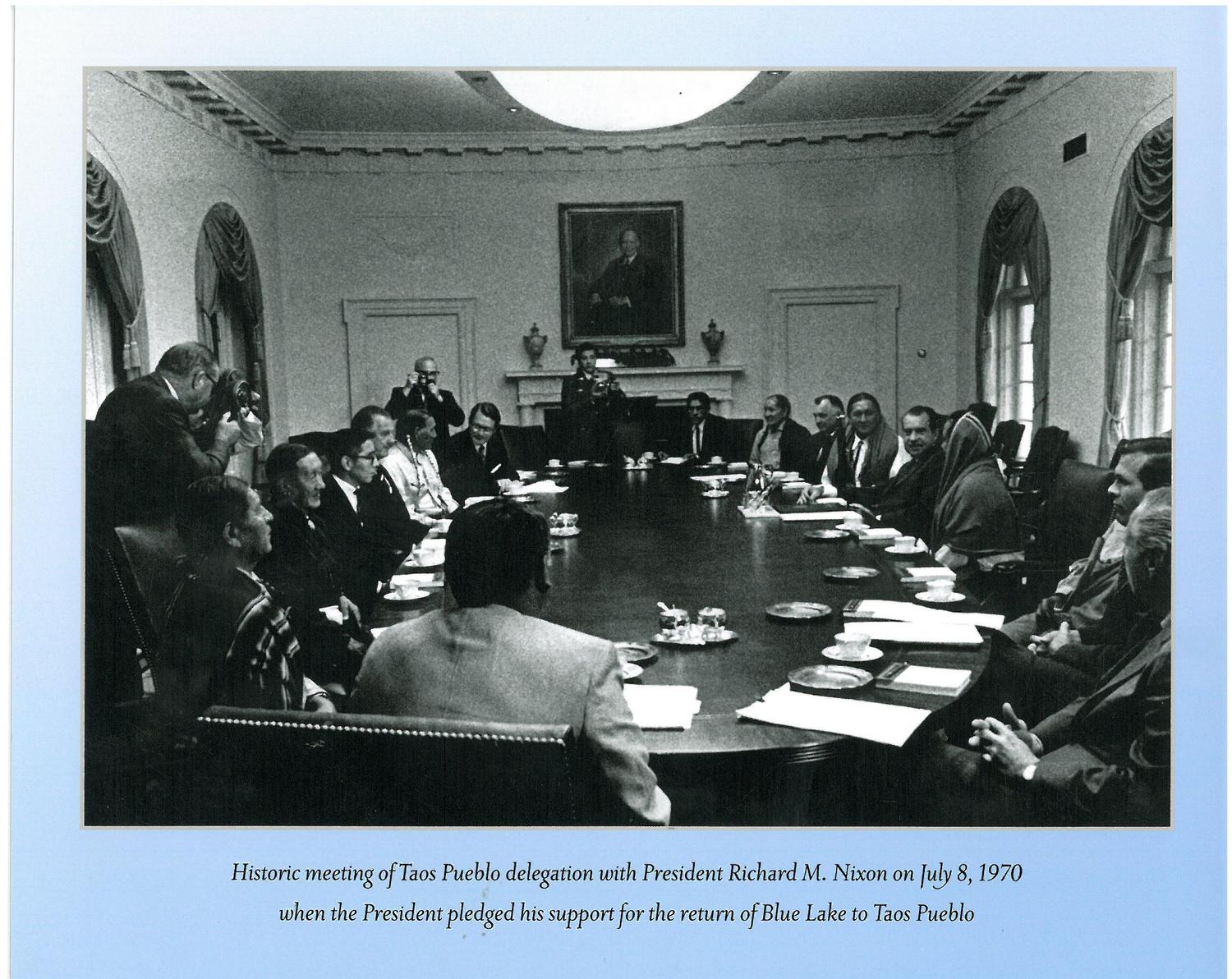 President Nixon meets with the Taos Pueblo delegation in the White House Cabinet Room. According to Bobbie Kilberg, meetings in the Cabinet Room was usually reserved for "Cabinet meetings, for governors, for heads of state. . . And so for the President Nixon to use the Cabinet Room was a recognition that he was dealing with tribes, which were sovereign governments, that this was something extraordinarily important to him." (p. 13 of her 2007 interview transcript)

Image from The Harwood Museum of Art

Note on Nomenclature and Imagery

In 1492, Christopher Columbus landed in the Caribbean islands and assumed that he had reached India. The term “American Indian” has been widely used to identify the first peoples of this land, long after everyone recognized it as a geographical misunderstanding. The consensus, however, is that whenever possible, Native people prefer to be called by their specific tribal name.

We have tried to avoid linking to images of Blue Lake itself out of respect for religious traditions.